After I made the big move to Poland and started to adventure around my new home, I thought my life would settle and get easier. I was wrong. My journey in this new country was just getting started and it hasn’t been easy.

Probably the scariest part of moving to new place, especially for a shy person like me, was meeting new people. I have never been outgoing and always had a hard time making friends because I never want to annoy people. I am weird and I honestly didn’t know what type of people I would meet at school. The first couple days were definitely interesting. I go to Kozminski University which is a small school compared to West Virginia University. All my classes were with the same people so I felt even more anxiety with the thought of making a good first impression. I had to face my fears though and put myself out there. Eventually, I was able to meet some of the nicest people and was lucky enough to find a group of people that wanted to be friends with me, even the weird, loud, American me.

Besides just making friends, I had to adapt to a new way of life. Everything was different, from going to the store to making a doctor’s appointment. One of the hardest things living abroad is the language. To this day I still struggle with the fact that I don’t know Polish. It is a hard language to learn and even the words I do know definitely don’t sound good. Living in Warsaw, most people speak at least a little bit of English but it still isn’t the same. Doing simple things like getting ham slices from the deli counter or knowing how to respond when the cashier asks if you want a bag, can induce so much anxiety. To be honest sometimes it still does. At the beginning these simple, daily tasks were exhausting. It was a struggle mentally to muster the courage to stumble my way through a simple conversation.

Once I landed in Poland, everybody I knew kept asking me about what the biggest differences were between living the US and Poland. The first thing that was different, and still hard for me to accept is the fact that there are no dryers. I mean they exist but they aren’t common. I have done laundry before and then hung it up to dry, but have never had it been the only option. It is nice because it saves energy and space by not having a dryer, but those are the only two positives in my opinion. It takes forever to do a load of laundry so it was a completely new concept to me.

The next difference was the fact that not every single thing is available. Being raised in a society with expansive grocery stores and super Walmarts, it is a little bit of a shock to have less options. For example I love Lucky Charms and Chocolate Chip Cookies. I have never seen one box of Lucky Charms here in Poland and after an expansive search I was able to find a small pack of chocolate chips for cookies that were very overpriced. It may not seem like a big difference but trust me, it is. Every recipe I find on Pinterest I have to check the ingredients to make sure I can even get everything.

Living abroad definitely has its challenges, but at the end of the day I think it is beyond worth it. 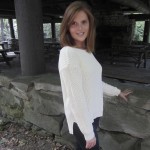